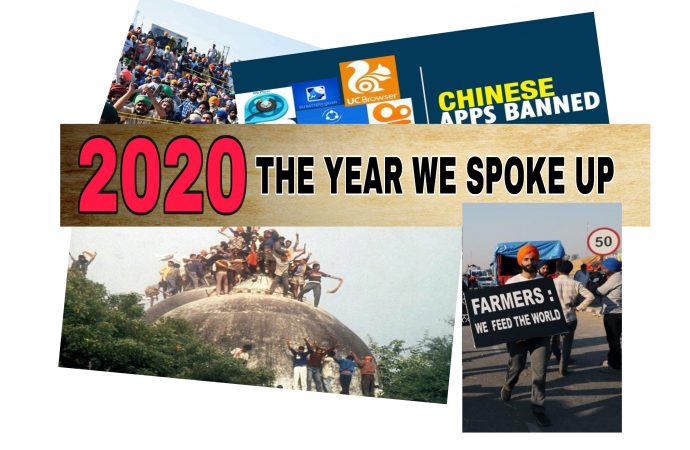 Manya Nagarajan & Mehak Khattar
Amidst a global pandemic, we chose to speak out about all the things that mattered. When life slowed down, because work was scarce, we realized the causes that were closest to us, those that mattered most and we took to public platforms to take a stand, some of us even took to the streets.

The year 2020, showed that it’s people like us who run the country. The point wasn’t to achieve success in all those endeavours, it was to make the authorities feel that they were being watched and followed. We aren’t just passive recipients of outlandish populist measures or fancy welfare schemes. We know what we want and more importantly what we don’t.

We began the year with taking Covid-19 seriously, and sharing memes about bats turned into trying to understand what the virus was.

January also saw some of the most large scale protests, with students from JNU and DU as well as crowds gathering daily at Shaheen Bagh and Jantar Mantar.

In February of this year, the then President of the United States, Donald Trump visited India in an event called ‘Namaste Trump’, eventually after which the capital burnt with riots taking place on the streets that once bore witness to peaceful protestors and AAP secured full majority In Delhi Assembly elections

The month of March was when the Tablighi Jamaat Covid hotspot was discovered in Delhi’s Nizamuddin Markaz Mosque. It turned out to be a coronavirus super-spreader event, which was then staged as a controversial pro hindu far right media campaign, which spread a lot of misinformation about the religious congregation.

In April eight months ago, lockdown was extended and the country battled with the forest fires in Uttarakhand. We also made strides in learning about the virus and discovered that plasma therapy would not be a cure to the infection.

Seven months ago from now, In May, the biggest event was when there was a  Visakhapatnam gas leak, also referred to as the Vizag gas leak and also Cyclone AMPHAN came about in eastern India.

In June, six months ago, the harvest suffered as the locust plague hit Northern states across the country and as part of Unlock 1, we began moving out for work again while 3 farm ordinances  were passed and the Sushant Singh Rajput case was opened. There was unrest at the Galwan Valley Ladakh LAC and India won a 2year seat in the UNSC beginning Jan 2021. A step in retaliation to the ongoing conflict with china, Chinese apps were banned in the country.

It’s been five months since, in July, Vikas Dubey a criminal from UP, was captured and encountered, triggering the Judicial Killings debate; the number of Covid cases crossed 1 million and also the government introduced the widely discussed NEP 2020.

And four months since, in August,  the Ram Temple Verdict was announced, Air India Flight 1344 crashed killing 19 people including 2 pilots and our GDP first recorded effects of Covid and fell by 23.% in August.

In September, the Lok Sabha passed the Farm bills, and the Court acquitted 32 people accused for the demolition of the Babri Masjid.

The devastating Hathras Rape and Murder case also took place in this month and an Ex naval officer was assaulted by members of the ruling Shiv Sena Party.

Its been two months since, in October, when  there was a big controversy regarding the Tanishq Advertisement which questioned the acceptance of inter-faith marriages in our country. On the other hand, front line workers got the COVID-19 vaccine in phase 1 and also big media houses like Aaj Tak and Zee news were asked to apologise for how they had covered the SSR case. On the International front, Pakistan acknowledged its involvement in Pulwama attack.

Last month in November, J&K introduced new Land Laws which were largely questioned by the locals. In Bihar, BJP made a promise of distributing the Covid vaccine in return for them being voted in as the ruling party.

The Government announced that OTT platforms will now be regulated by them soon after which HuffPost India also shut down.

The new Farmers’ Bills caused great agitation in Punjab leading to a massive Punjab Farmers protest and the new Love Jihad laws, which were passed in UP through an ordinance also caused massive unrest and initiated, once again, a conversation on the questioning of the acceptance of inter faith marriages in our country.

On the international front, Joe Biden won the US elections, bringing hope for the residences of the USA.

And lastly, This month, in December, the farmers demanded that the bills be withdrawn entirely, 5000 nurses from AIIMS New Delhi went on Strikeover their long pending demands, including those with regard to the Sixth Central Pay Commission (CPC) and 4 Accussed in Hathras Gang rape and Murder were convicted. The Winter Session of the Parliament was cancelled due to Covid and the PM and Vijay Malllya’s assets were sealed.

Although we say that life slowed down for most of us, events of significance continued to take place around us. This year the news kept all of us busy, this year it forced all of us to pay attention. It forced us to get informed, and stay connected with all that was happening in the country.