Justice D. Y. Chandrachud is sworn in as the 50th Chief Justice of India 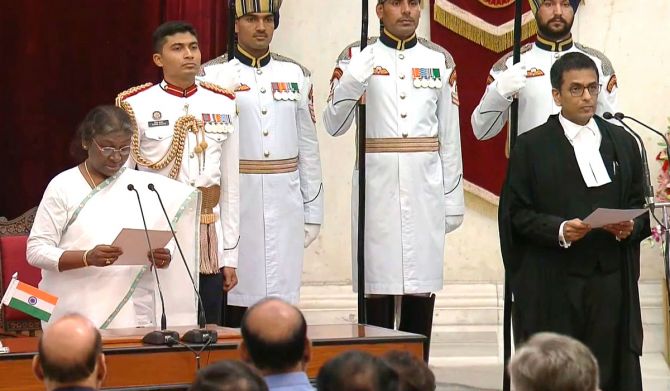 Justice Dhananjaya Yashwant Chandrachud, who was part of the Supreme Court benches that delivered several landmark verdicts including the Ayodhya land dispute case, was sworn in as the 50th Chief Justice of India on Wednesday.

President Droupadi Murmu administered him the oath at a brief ceremony held at the Rashtrapati Bhavan.

Immediately after the swearing in ceremony at the Rastrapati Bhawan, the 50th CJI reached the Supreme Court premises and paid floral tributes to Mahatma Gandhi.

“Serving common people is my priority. Please look forward, I will work for all the citizens of the country. Be it in technology or be it in registry…or be it in judicial reforms, I will take care of citizens in every aspect,” he said.

CJI Chandrachud said heading the Indian judiciary was a “great opportunity and responsibility”. 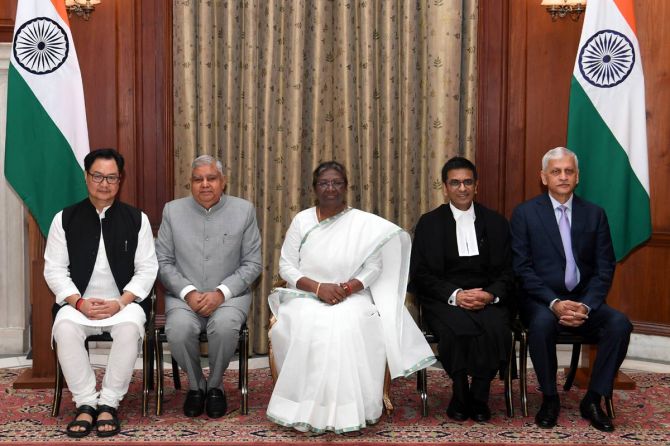 Justice Chandrachud took over as the CJI from Justice Uday Umesh Lalit, who demitted office on Tuesday, and will head India’s jJudiciary until November 10, 2024, a day before he completes 65 years.

Prime Minister Narendra Modi, who was not present at the event, tweeted, ““Congratulations to Dr Justice D Y Chandrachud on being sworn in as India’s Chief Justice. Wishing him a fruitful tenure ahead.”

His predecessor, Justice Uday Umesh Lalit, who demitted office on Tuesday, was also present at the oath-taking ceremony.

Justice Chandrachud, who calls dissent the “safety valve of democracy”, was part of several Constitution benches and landmark verdicts of the top court, including on matters relating to the Ayodhya land dispute and Right to Privacy.

He was also part of the benches that delivered path-breaking judgments on decriminalising same-sex relations after it partially struck down Section 377 of the Indian Penal Code, validity of the Aadhaar scheme and Sabarimala issue.

Recently, a bench headed by him expanded the scope of the Medical Termination of Pregnancy (MTP) Act and the corresponding rules to include unmarried women for abortion between 20-24 weeks of pregnancy.

A bench headed by him had also passed several directions to assuage people’s miseries during the Covid-19 crisis, terming the brutal second wave of the pandemic last year a “national crisis”.

Recently, Justice Chandrachud, as the senior-most judge after then CJI Lalit, was among the two judges of the apex court collegium who had objected to the method of “circulation” adopted for eliciting views of its members on the appointment of judges to the top court.