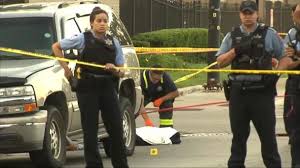 Television images showed scores of shoppers and retail clerks lining the sidewalks and parking lots outside the mall, which is one of the largest in Canada, in Toronto’s north end.

A fight between two groups of young men that culminated in shots being fired has prompted the evacuation of a mall in Toronto, a month after a mass shooting in the nation’s largest city left two dead.

Police Superintendent Rob Johnson said the shooting took place on Thursday on the east side of the gigantic Yorkdale Shopping Centre that is popular with locals.

It began, he said, as an altercation between “two groups of males” with three or more on each side. “At least two shots” were fired by one person with a handgun, before fleeing.

One person was taken away by paramedics in an ambulance, but police said it was “not as a direct result of the shots fired.” A handful of others also suffered minor injuries as they rushed to the exits after the shots rang out, said Mr. Johnson.

Television images showed scores of shoppers and retail clerks lining the sidewalks and parking lots outside the mall, which is one of the largest in Canada, in Toronto’s north end.

Mall officials said stores that were locked down during the incident would remain closed until morning.

Area transit was also temporarily suspended while police searched for the suspects described as in their 20s, wearing hoodies and jeans.

On July 22, a man opened fire in a bustling Toronto district, killing an 18-year-old woman and a 10-year-old girl while wounding 13 other people. The suspect died in a confrontation with police.

The rampage — just the latest in recent years that shocked Canadians unused to gun violence — has prompted the federal government to look into gun control.

On Tuesday, Prime Minister Justin Trudeau asked his government to study the possibility of a total ban on handguns and assault weapons.