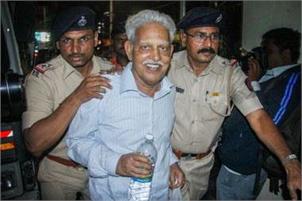 Hyderabad, Aug 30 (PTI) Left leaning Telugu poet and writer Varavara Rao who was arrested by the Pune police for his alleged links with Maoists reached home this morning after the Supreme Court directive.

The apex court yesterday ordered that the five activists, arrested on August 28 in connection with the Bhima Koregaon violence case, should be kept under house arrest till September 6.

“They (Pune police) brought him home at 7 in the morning. He was brought to the city by flight,” Rao’s wife Hemalatha told PTI.

She further said the police is not allowing anyone except his daughters and sons-in-law into or out of the house.

Earlier, there was confusion as to whether the local police or Pune police would manage the writer’s house arrest.

Rao was arrested from here, while activists Vernon Gonsalves and Arun Farreira were nabbed from Mumbai, trade union activist Sudha Bharadwaj from Faridabad in Haryana and civil liberties activist Gautam Navlakha was arrested from New Delhi.

The Maharashtra police had arrested them in connection with an FIR lodged there following an event-‘Elgaar Parishad’ (conclave)- held on December 31 last year that had triggered violence at Koregaon-Bhima village.