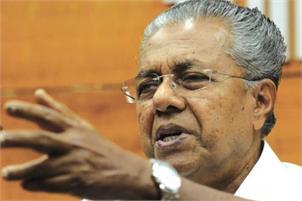 Thiruvananthapuram, Aug 30 (PTI) As Kerala picks up the pieces, Chief Minister Pinarayi Vijayan today said the government would explore the possibility of legal options to avail the funds offered to the state, including that from abroad.

His statement assumes significance in the wake of a row over the Centre’s refusal to accept the United Arab Emirates’ (UAE) reported offer of Rs 700 crore to the flood-hit state.

Addressing a specially convened one-day session of the state assembly to discuss the unprecedented flood situation, Vijayan said 483 people have lost lives in the state since the onset of monsoon on May 28 and 14 were still missing.

He said the state’s economy had been badly hit and the loss could be much more than the state’s annual plan outlay for the year which stood at Rs 37,247.99 crore.

“Offers of financial assistance for Kerala are pouring in from different quarters of the world. The government is also moving towards legal steps to avail these funds,” Vijayan said.

The funds offered from across the globe is giving confidence to the government, he said.

Besides Rs 600 crore sanctioned by the Centre, the state was hopeful to get more financial assistance from the Union government considering the gravity of the situation, the chief minister said.

“The Chief Minister’s distress relief fund has received Rs 730 crore till yesterday,” he said, adding that the government had also been offered land and jewels towards relief fund.

On the discussions held with World Bank officials as part of fund mobilisation for rebuilding the state, Vijayan said the government policy was to accept funds from any quarters if it was in tune with the state’s interests.

Apparently referring to the Opposition charge that the deluge that ravaged the state was due to the sudden release of water from dams without any prior warning, the chief minister said unexpected torrential rains had resulted in the calamity.

“The state had received rains three times more than what was predicted by the India Meteorological Department (IMD) during the period,” he said.

The IMD had forecast an estimated 98.5mm rainfall in the state between August 9 and 15. But, the actual rainfall received was 352.2 mm, he added.

Terming the calamity as the worst in the century that had virtually battered all sections of the economy, the Left leader said 57,000 hectares of agricultural land was flooded.

But rescue operations were carried out promptly and on a war-footing by the government in coordination with various defence forces. The effort helped reduce the death toll, Vijayan said.

With regard to the rehabilitation programmes, he said the gravity of the calamity had also raised some environment issues.

“One of the most significant points is whether to rehabilitate the displaced people in the same places where landslips, landslides and mud slips occurred. A consensus has to be evolved in this,” the Kerala chief minister said.

He also wanted that environmental aspects should be considered while taking up construction activities in these areas.

Incessant rains and floods have forced over 14.50 lakh people to seek refuge in relief camps across the state, he said, adding that over 59,000 people are still lodged in 305 camps.

Meanwhile, Opposition member V D Satheesan (Congress) maintained the charge that the floods were due to the simultaneous release of water from various dams.

CPI(M) veteran and former chief minister V S Achuthanandan batted for the implementation of the Madhav Gadgil committee report on the preservation of ecologically fragile Western Ghats to avoid such calamities in future.

He also wanted all illegal constructions in the ecologically sensitive areas to be removed.