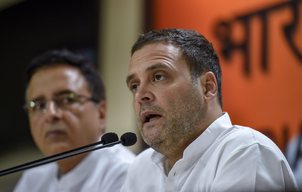 New Delhi, Aug 30 (PTI) Congress president Rahul Gandhi today launched a major offensive against Prime Minister Narendra Modi alleging that demonetisation was a “huge scam” deliberately inflicted by him on common people to snatch their money and give it to his “crony capitalist friends” and said he owes an answer to the country on why he did so.

Addressing a press conference a day after the Reserve Bank of India in its final report said almost all the money demonetised currency has returned to the banking system, he said the note ban decision was not a mistake but an assault on the common man.

“Noteban is nothing less than a huge scam and evidence is slowly coming out… You apologise when you make a mistake. Demonetisation was not a mistake, but done deliberately by the prime minister as a well thought-out attack on you (the people of India) with the intention of helping his 15-20 crony capitalist friends. His aim was to help big crony capitalists who have marketed him, by handing over the money snatched from the pockets of common people,” Gandhi told reporters.

He was asked if the Prime Minister should apologise for the note ban decision.

“The Prime Minister Modi should answer why he inflicted the deep wound like demonetisation when issues like unemployment and low GDP rate remained,” the Congress president said while referring to the RBI’s report on the outcome of the demonetisation exercise.

The Congress chief said noteban had no positive results and the prime minister has “to answer the country and to the youth who are suffering from unemployment, as to why you inflicted such a wound on the country. What was the reason and logic behind it.”

He alleged the prime minister took the decision to help his big industrialists friends convert their black money and those who had a lot of NPAs on them.

“His (PMs) 15-20 big crony capitalist friends who had taken loans from banks, had a lot of non performing assets (NPAs) and Narendra Modi took away the money from your pockets and put it into their pockets,” he alleged.

Gandhi also alleged that at the time of noteban, “many of Modi’s friends converted their black money into white”. Citing the example of Gujarat, he claimed Rs 700 crore was converted in the cooperative bank in which BJP chief Amit Shah is a director.

“Was there a probe as to whose money was converted,” he asked.

Taking a swipe at Modi, Gandhi said he rightly claims that what he achieved was never done in the last 70 years. Demonetisation is proof of that as it was aimed at helping only the rich, he added.

To a question on the intention behind noteban, Gandhi said “You will find out soon enough what the intention was. Their intention was very clear and let every Indian person understand this. The intention was to help the richest people, the most corrupt people in this land to change their money from black to white.”

In response to another question on huge sums of money allegedly being deposited in banks ahead of demonetisation, he said, “The evidence is coming out. You will see that noteban is nothing less than a huge scam and slowly the evidence you are talking about is coming out and more and more will come out.