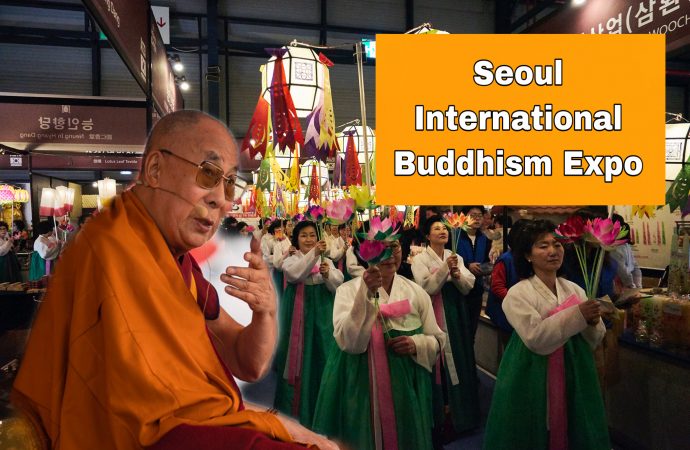 This year’s online Expo will showcase a global following born out of the traditions, beliefs and spiritual practices of Buddhism.

The Dalai Lama will headline this year’s Seoul International Buddhism Expo, a festival promoting Korean Buddhist and traditional culture, which like many events staged during the pandemic, will be heldvirtually.

Other headliners include world renowned meditation master, Mingyur Rinpoche, ‘dubbed the happiest man on earth’. Rinpoche renounced his world trappings to spend long periods of isolation in the Himalayas, honing his interest on the scientific implications of meditation on brain function and the nervous system.

The four-day on-line event to be streamed via www.bexpo.kr and Zoom conference sessions will feature seminars on Korean Buddhism, Southern Buddhism, Western Mindfulness, and Tibetan Buddhism from November 5th to 8th.

Organisers said the theme of the web conference is ’embracement’ with sessions that will focus on how to overcome pandemic depression with ‘mindful wellness.’

“This will be the first time the Dalai Lama will greet Korean Buddhists directly via our event… The Dalai Lama plans to deliver a short but powerful message to Buddhists in Korea through a 12-minute video greeting,” said an event spokesperson.

The Seoul International Buddhism Expo is one of Asia’s most diverse expos, that showcases a global following born out of the traditions, beliefs and spiritual practices of Buddhism.

Last year it attracted over 70,000 local and foreign visitors, from across Asia, Europe and North America.

It is staged by Korean Buddhist Jogye Order, which represents the largest segment of South Korea’s Buddhist population, administering about 1,900 active temples with more than 13,000 monks and nuns who lead seven million followers nationwide.

Other speakers at the expo include Rick Hanson, an American neuropsychiatrist, who is renowned for his research on Buddhism and neuroscience and Tara Brach, a leading western teacher of Buddhist meditation, emotional healing and spiritual awakening.

For more information on the speakers and how to register for the Expo please visit the website  https://www.bexpo.kr/conference/introduce_en